The Southern Cross project is the Company’s flagship exploration project, prospective for gold mineralisation and located in close proximity to a number of large producing mine sites.

The project covers 76 km² of tenements and includes three key prospects, which the Company expects to examine through a modern, systematic exploration program.

The Glendower prospect is located at the site of a historical mine site 10km north of the Marvel Loch mine.

Glendower has a strong history of production, having delivered 360 tonnes at an average grade of 18.6 grams per tonne of gold.

The area is divided into two open and pits – Glendower North and South – and the Company anticipates exploring both regions, as well as the wider region through step-out drilling.

To date, no exploration work has been conducted at a depth lower than 100m, offering the Company opportunity at shallow targets as well as at depth. 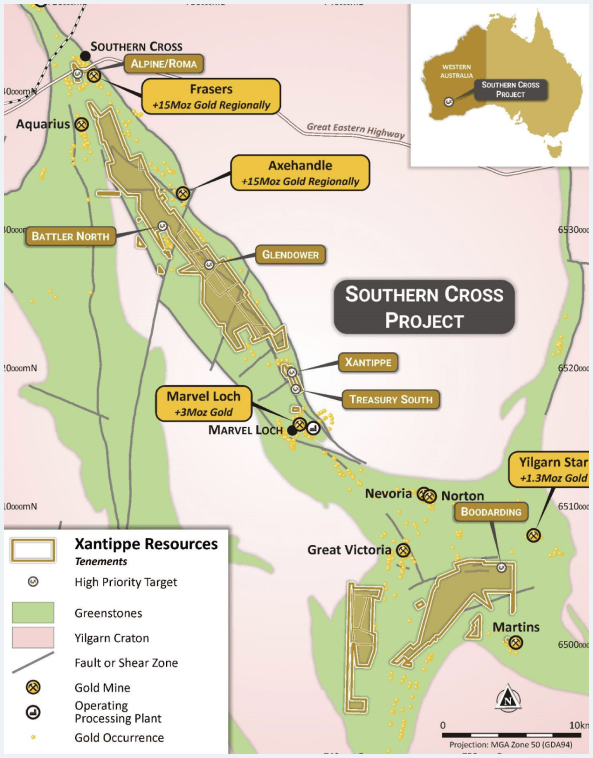 The Xantippe and Treasury South prospects are located across contiguous tenements that are approximately 4km north-west of the Marvel Loch mine.

The tenements contain a series of historical workings which date back to the early 1900’s, however no modern exploration has been conducted as site. This presents the company with a compelling opportunity within one of the world’s top-tier gold destinations.

Like Glendower, no drilling has been conducted at a depth below 100m, and existing exploration has returned positive results.

At the Xantippe prospect, historical exploration has returned: 13m @ 4.69 g/t from 38m.